You know how sometimes you see a game and you think “that looks like fun, but it probably doesn’t have a whole lot to say”?

I should know better than to think like this by this point, as I’ve had my expectations subverted more often than not over the course of the last decade or so, but nevertheless, it still happens; I still sometimes end up surprised by getting both exactly what I expected and a whole bunch of other stuff besides.

Today’s award celebrates a specific game that I took a long time to get around to actually playing… but I’m really glad I finally did.

“Ah, it’s the girls of Senran Kagura spending an entire game in bikinis shooting water pistols at each other!” I thought. “That looks like fun, but it probably doesn’t have a whole lot to say.”

I was wrong. Very wrong indeed. As previously noted, just within the Senran Kagura series alone I’ve been constantly surprised by the variety of deep, meaningful and emotional stories these girls have to tell, but somehow it just seemed… unlikely that this game which looked more like a light-hearted spin-off would follow that mould.

Listen to me now: absolutely, positively, definitely, Senran Kagura Peach Beach Splash is an important and canonical entry in the overall Senran Kagura series, forming an intriguing, satisfying and emotionally engaging run-up to what looks like being the “grand finale” in Senran Kagura 7even (if we ever see that at this rate) while shaking up the mechanics to provide something new and interesting. 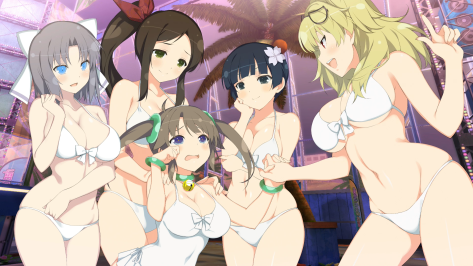 Like most previous Senran Kagura games, Peach Beach Splash features a number of narrative paths that focus on the smaller sub-groups of the full cast, and each has its own specific piece of subject matter to explore.

The story of the Hanzou girls, for example, explores the fear of change and of moving on in your life, as Ikaruga becomes highly emotional over the realisation she will be graduating soon; while the New Hebijo gang struggle with matters of jealousy, affairs of the heart and the love between siblings.

Homura’s Crimson Squad, meanwhile, do their best to engage with the modern phenomenon that is social media and online video sharing in an attempt to secure some paying work for themselves, while the Gessen girls have to come to terms with one of their number potentially leaving them for overseas opportunities. 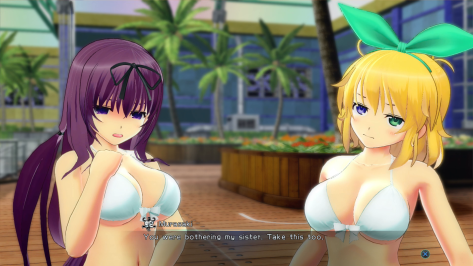 All of these stories have great meaning to the cast, particularly if you’ve been following them since the very beginning of the series, and it’s clear that everything is “winding up” for something big.

Once the four initial stories are done with, there then follows a sequence of episodes that tie everything together and bring things to a suitably dramatic conclusion… culminating in one hell of a teaser for whatever the next game ends up being. Let’s just say that if both Homura and Asuka make it out alive from the series’ “grand finale” I’ll be very surprised.

And on top of all this, it’s an immensely satisfying game to play, too. It didn’t feel like Japanese developers really “got” first- and third-person shooters for a while, but Peach Beach Splash’s high-speed, arcadey gameplay proves that they’re well and truly on track these days; it’s immensely satisfying and enjoyable to engage with, and, at times, feels like a lost Sega game in terms of both execution and presentation. 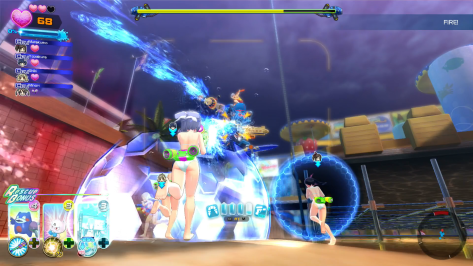 There are a variety of different weapons to use, each of which handle very differently from one another, and the collectible card mechanic that allows you to outfit yourself and your teammates with a variety of cooldown-based special abilities really makes for some interesting high-speed tactical situations at times. There’s a substantial progression-based metagame here if you care to engage with it — but equally, if you just want to enjoy the story, you can also plough through the narrative at your own desired pace without any real need to grind or seek out rare drops.

Senran Kagura Peach Beach Splash was one of the most pleasant surprises I had from this year’s gaming, and I’m very, very glad I finally made the time to give it the attention it deserves. If you’ve been holding fire on it — no pun intended — because it looked like it might be a silly spinoff, rest assured, this is very much a proper Senran Kagura game in terms of narrative; the girls just happen to be blasting each other with water cannons rather than kicking the snot out of one another.

It’s also a potent example of something I’ve been arguing for a long time: that the cast of Senran Kagura is now more than strong enough to transcend their original context, whether that’s narratively or mechanically. People love these characters because they are characters, not because one has a particular moveset that they like.

People care about Shiki’s future; people care about the normally stern and stoic Ikaruga breaking down in tears; people even care about Katsuragi getting pretty explicitly frisky with a young kouhai. And Peach Beach Splash is a great way to spend even more time with these wonderful, widely beloved characters… before they face their fiercest challenge yet.

One thought on “The MoeGamer 2019 Awards: The Unexpectedly Meaningful Award”