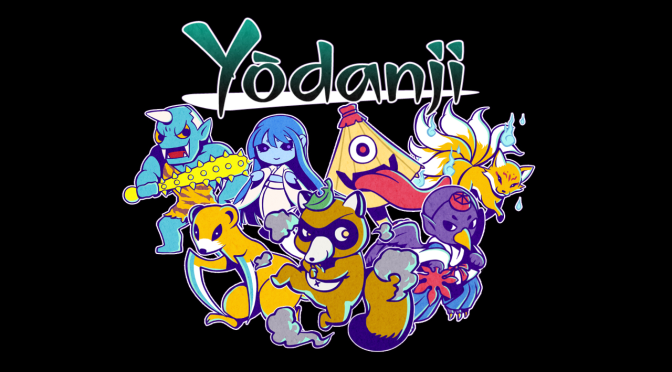 Every now and then, I like to trawl through Nintendo’s various digital marketplaces to see if anything interesting catches my eye.

The most bounteous sources of unusual and cheap Nintendo- based entertainment to date have been the 3DS eShop, which brought us games such as the highly unusual but thoroughly compelling Puzzle Labyrinth, and the Switch’s eShop, which is awash with small-scale indie projects from all over the world.

One that grabbed my attention recently — primarily due to it being on sale for less than what you’d pay for breakfast at Starbucks — was Yōdanji, a game originally released by Kemco for PC, mobile and Switch in 2017, and a self-described “coffee-break roguelike themed after Japanese folklore tales”. I’m in! Let’s take a look.

Yōdanji’s concept — not that it really matters once you start playing — is based around a fictional smartphone application that allows people to capture yōkai, the many varied and wonderful creatures and spiritual entities from Japanese folklore. This isn’t a Yōkai Watch or Pokémon ripoff, mind you; here, you actually take on the role of the yōkai you acquire in an attempt to… well, acquire more of them.

You begin the game with a semi-random selection of three yōkai, and four ways to play. A simple, short tutorial walks you through the basic controls and gets you up and running within a couple of minutes; the main Yōkai Hunt mode tasks you with retrieving three scrolls and taking them to the tenth level of the dungeon; the Picnic mode is the same but easier; and an Endless mode provides the longevity after you’ve unlocked all the available yōkai.

Each yōkai has four different skills, each of which has a cost to unleash both in terms of your “SP” meter and the hidden “hunger” statistic. Each skill also has four tiers of effectiveness, and you get to upgrade (or unlock) one of these skills each time you level up.

Yōdanji has an unconventional levelling system. Rather than earning experience by defeating enemies, you instead gain levels by hunting down a hitodama (a ball of blue flame representing a human soul) that is lurking in each of the ten levels. You start each run directly in front of one of these so you can always immediately unlock a skill, but others have to be sought out — and sometimes enemies have captured them, requiring you to defeat the enemy before you can absorb the hitodama’s power and level up.

What this means in practice is that there’s no need to grind in Yōdanji; instead, the only real “requirement” for each level is to find the hitodama and, on levels 4, 6 and 9, one of the three scrolls you require to reveal the boss and unlock a new yōkai. However, it’s still worth exploring each level to try and track down other items, the most useful of which are magical talismans which confer some sort of passive bonus on you while they are held.

There’s a twist, though; your inventory can only hold five items. And that includes the three scrolls you need to unlock the boss and any talismans you stumble across. That, as you might expect, doesn’t leave a lot of room for food and healing items.

Fortunately, you have a few options available to you. Unusually for a modern roguelike, you are able to return to previous levels via staircases up, allowing you the opportunity to “dump” items you don’t need immediately on an earlier level and then come back to retrieve them later. This is especially useful with the scrolls; using this system, you can put two of the scrolls in place to unlock the boss then go back and retrieve the third from an earlier level, allowing you more inventory space to store healing or buff items. This also means that you can’t really “miss” anything, since you can always return to a previous level to pick up something you left behind.

On top of that, you’re able to use items you find on the floor immediately without adding them to your inventory. This is particularly useful when it comes to food, which can be immediately consumed; since you’re playing a yōkai, not a humanoid character, you can have no qualms whatsoever about devouring the corpses and bones of your enemies if there is nothing more palatable lying around, too.

The various yōkai are all very different to one another. Some are better suited to direct, up-close melee combat, while others have skills that allow them to attack from a range. Nekomata has a delightful necromancy skill that allows it to raise corpses and bone piles into skeletal servants, while karakasa can turn into an umbrella for rapid healing and reduced hunger, or lick its enemies to paralyse them.

The subject matter is treated with a great deal of respect. Each yōkai you unlock has an illustration and a well-written short story explaining its origins, and the scrolls you acquire during a run through the main game mode contain fragments of this story, providing you a teaser of what you’ll unlock if you’re actually successful. The pixel art sprites that represent the different yōkai are distinct from one another, recognisable as the different creatures and spirits if you’re familiar with the original legends… and kind of adorable, too. They’re cool little critters that it’s a pleasure to collect… and with the high challenge factor of the game, it’ll take a while for you to catch ’em all, too.

The only real area where Yōdanji lets itself down is in its background music; the menus and the gameplay each have a short music loop that is no more than about 10 seconds in length, and they just cycle round and round and round and round forever, with no variation as you progress through the several different visual tilesets of the dungeon on your way to the tenth floor. Thankfully, you can turn the music off altogether if you desire (and you almost certainly will), and the actual sound effects during gameplay are both entertaining and amusing as well as providing helpful feedback on your situation.

Yōdanji isn’t a complicated game, but it’s not trying to be — that’s what is meant by “coffee-break roguelike”, after all. What it does provide is a straightforward but varied and very addictive dungeon crawling experience with some interesting and unusual mechanics — and play sessions that are eminently friendly to handheld play, thanks to lasting no more than about ten to twenty minutes even for a successful clear. (And you absolutely will not clear this on your first attempt!)

It’s a great example of a game having simple, clear and easy to understand mechanics, and then applying those mechanics in varied and interesting ways to keep things entertaining over the long term. It’ll take you a good long while to unlock all the yōkai, and after that you’ll have a variety of different ways to play and enjoy the Endless mode to your heart’s content.

Yōdanji, much like any coffee-break roguelike, will probably never be anyone’s “main game” that they have on the go at any given time. But it’s a great title to have in your library — particularly in its Switch incarnation — ready for when you just fancy a bit of quick dungeon crawling that you don’t have to think about too much.

Or indeed to indulge those fantasies you’ve always had about stabbing sentient umbrellas as a dual-wielding weasel. We’ve all been there.

One thought on “Yodanji: Stabby Weasels and Licky Umbrellas”