Over the years, numerous classic arcade games have been remade, recycled and reimagined in various different ways. Some get this treatment more than others.

While Taito’s line-drawing action puzzler Qix has been by no means immune to this phenomenon — indeed, on more than one occasion by Taito themselves — it’s not a formula we see experimented with quite as much as, say, the classic space shooters of yore — or the twin-stick blasting of Robotron 2084 in particular.

It’s even rarer that we see a reimagining quite as inventive as what we have in Laughing Jackal’s Cubixx, a game that began its life as a PlayStation Mini in 2009, subsequently got HD-ified in 2011, and which has now been resurrected once again for everyone’s favourite “I wish every game was on this platform” console, the Nintendo Switch. Let’s take a look.

Cubixx is a pretty literal translation of the Qix format from a flat single plane to the six sides of a cube. You control a marker that can draw white lines and cut off parts of each cube face; you get combo bonuses to your score if you cut off bits from multiple faces in one single “motion”; your perpetual foe is an indestructible thing that idly bounces around each face; and your sole aim is to slice off a particular proportion of the cube (like a fine ham) while trying not to die.

And there are many ways to die, which vary from level to level. The aforementioned perpetual foe is the titular Cubixx itself, which will cause you to explode if it hits either you or your line while you are drawing. It also determines which part of the cube gets “cut off” when you complete a line; the side of the line that contains the Cubixx is always the side that survives, so if you plan accordingly you can cut large chunks off in one go.

There’s a slight twist on the usual Qix formula due to the cube format; while in the original Qix you could shrink the available play area down on all sides and end up with a small region in the middle, in Cubixx you always need access to the sides of the cube so you can transfer from one face to another. Thus, if you cut off parts of the cube in such a way that you create a “stranded” region in the middle of a face, it will slide across until it hits an edge rather than leaving you trapped. They thought of everything, huh?

As you progress through the levels of the game’s main Arcade mode, it introduces more and more ways in which it will try to kill you. This includes smaller, purple-coloured Cubixxes (if that’s the correct plural) that can be killed by trapping them in a different region to the main Cubixx; glowy things that travel around the lines you have drawn; a flaming tail that chases you while you’re drawing a line; sinister black clouds that slow down your movement if they spot you until you leave the face they’re guarding and meteors that impact the surface of the cube after a clearly visible (and panic-inducing) telegraph.

The game works on a ten-level cycle, with each ten-level block of stages generally cycling around various combinations of these foes: first just the Cubixx, then the Cubixx and its smaller ones, then perhaps the glowy things, then perhaps the smaller Cubixxes and the glowy things together, and so on. The tenth level of each block is always significantly more challenging, usually by requiring you to claim a much larger proportion of the cube than in its immediate precursors, and thus acts as a good means of gatekeeping your way to the next difficulty tier.

You’re essentially doing the same thing over and over in Cubixx, but this level structure keeps things feeling fresh and interesting, and the difficulty curve is well-paced; with each new block of ten levels, things get tougher by enemies moving faster, more complex combinations of foes to deal with and simply more things to think about — including, as you progress, power-ups and power-downs.

There’s a wonderful bit of risk and reward at work with the latter in particular; deliberately grabbing a power-down by cutting off the bit of the cube it’s on will reward you with a significant score bonus, multiplied by your current combo. So if surviving an epic six-face combo wasn’t already tense enough, you can make your palms even more sweaty by deliberately triggering a particularly heavy meteor storm right over your head just before finishing your cut. The very essence of arcade pleasure.

There are plenty of other secret bonuses to seek out, too, most of which are worth significant amounts of points. Cutting off more than 50% of a face in a single slice awards you a “Divide and Conquer” bonus, for example, while claiming the vast majority of a face in total rewards you with the delightfully named “Big Face” bonus. And there are plenty more to discover in the pursuit of high scores.

The nice thing about Cubixx, though, is that if you’re not in the mood for chasing high scores, you don’t have to play it that way. Arcade Mode is primarily about clearing levels rather than scores, and provides the main long-term interest in the game, while several dedicated “attack” modes challenge you to score the most points with limited lives, a limited amount of time or just using a limited number of lines. You can also play the game cooperatively in local split-screen or in a dedicated Death Match mode where you try to screw each other over as much as possible; the simple, abstract gameplay here makes this a great pick-up and play competitive game which — you knew it was coming — makes it absolutely perfect for the Switch. 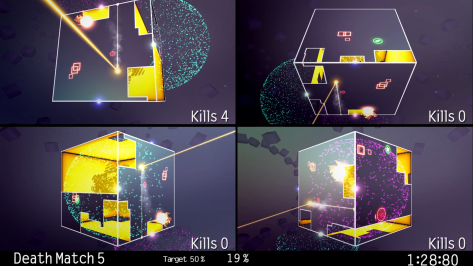 The whole thing is tied together with a really simple but effective aesthetic. The game uses clear, readable fonts and relatively minimal use of colours and textures, and complements the whole thing with an enormously varied throbbing electronic dance music soundtrack with an admirably large number of tracks; while I did hear a few repeats on my Arcade mode playthrough, I didn’t notice them until I’d got a long way through the levels, and the fact they’re tied to specific levels rather than randomly selected helps give each level a feeling of unique identity — no mean feat considering they’re all cubes!

In terms of both presentation and how it builds on a classic title, Cubixx actually reminds me rather strongly of Sidhe Interactive’s marvellous 2009 reimagining of the Breakout formula, Shatter. Like that game, Cubixx knows that the basic structure of what it’s riffing on is already solid, and knows not to go too crazy with its additions. Instead, what we have here is a game that feels authentic and respectful to its source material while providing its own unique (and well-presented) twist.

It’s a great addition to the lineup of quick-hit, easy-to-pick-up-hard-to-put-down arcade titles on Switch, and at just £5.99, it’s an eminently worthy, great value addition to anyone’s library.

Thanks to Ross at Laughing Jackal for the review copy.

3 thoughts on “Cubixx: White Lines Blowin’ Through My Mind”