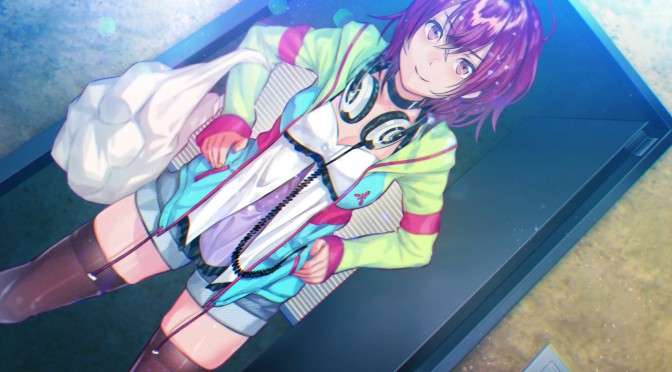 Asano Hayase from Red Entertainment’s visual novel Our World is Ended is a great example, affording Kitamura the opportunity to demonstrate her full vocal range over the course of the character’s development and narrative threads.

Asano is also an incredibly interesting, unconventional character in her own right, so she takes her place in the spotlight this week.

Some spoilers for Our World is Ended ahead!

Like the other lead characters of Our World is Ended, Asano is a member of the game development company Judgement 7. Her role on the team is sound design, meaning that she works on both background music and sound effects.

She is implied throughout the narrative to be simultaneously pretty good at her job but totally tone-deaf when it comes to singing, meaning that she tends to find herself working alone because no-one can bear to be around her during the creative process. Indeed, we discover later in the narrative that Judgement 7’s lead programmer, Sekai Owari, only hired her because she was singing on a street corner and being a public nuisance, and in the stress of the situation the only way he could think of to stop her was to hire her.

Asano is introduced to us as a “saddening” individual; one of the most frequently occurring words in Our World is Ended’s Japanese script is 残念 (ざんねん zannen: deplorable, bad luck, regret, disappointment, unfortunate), and more often than not (though not exclusively) it’s heard when someone is talking about (or, in some cases, to) Asano. 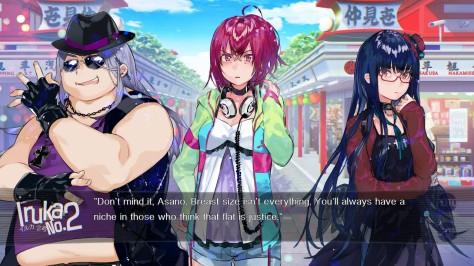 The reason for her “saddening” reputation is a combination of factors. Protagonist Reiji initially introduces her as being “blessed with the talent to break PCs and other equipment”, but almost immediately follows this up with a description of how frequently she gets rip-roaringly drunk, and a breast size comparison between her “bitty titties” and those of her considerably more well-endowed, F-cup younger sister Yuno. Asano is not best pleased any time someone brings this up, both because it’s something she is insecure about and she’s frustrated at the male chauvinists around her judging women by the size of their chesticles. Perfectly reasonable, I’d say.

However, Asano doesn’t help her own reputation in other ways. For just one example, she frequently goes to karaoke by herself as her main hobby outside of her work at the office, and when quizzed on this by her colleagues she simply shoots back “why would anyone ever go to karaoke with other people? It’s something you do alone! Do you have fun listening to other people’s crappy singing? Does it make you happy? Move you? Heal you? Well, it doesn’t do anything for me!” 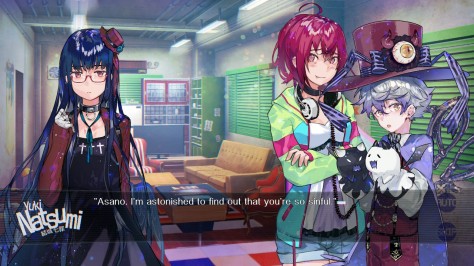 It’s not until a little later in the game that we discover one of the more significant ways in which she, like the rest of the core cast, has fallen out of step with the conventions and norms of polite society. Not to put too fine a point on it, she’s a shotacon — someone who finds young boys attractive, usually (though not always) with that attraction coming with sexual feelings. Asano seemingly skirts that latter line somewhat; she appears to be interested, but whether she’d actually take things beyond that line of no return isn’t entirely clear when we first learn about her nature, for reasons that will become apparent.

In one particular chapter of the game, the specific details of which I won’t spoil for now, Asano becomes obsessed with a young boy named Nichol — and I mean obsessed. She loses all reason when she’s around him, and doesn’t appear to be thinking rationally. In an attempt to snap her out of her delirium, which is well and truly out in the open by this point, her friends and colleagues come up with a plan for Reiji to disguise himself as Nichol and make her believe she’s having a date with him.

Over the course of the fake date, Asano gradually opens up to the disguised Reiji, noting that despite her behaving like a dribbling moron around others when Nichol is around, she actually finds his presence comforting, and that he’s easy to talk to. This is, of course, all Reiji’s doing, since the real Nichol is a character with… let’s just say a few unique quirks of his own.

As the date is coming to a close, Asano eventually admits the source of her interest in young boys: it’s because she feels safe with them, whereas she emphatically does not feel safe around most adult men.

The reason for this complex arising in the first place is that after the death of her parents while she and her sister were children, they were taken in by a distant relative who turned out to be abusive, violent and a paedophile. Not only that, when Asano decided to find work so that she could strike out on her own and take Yuno — the primary target of their foster parent — with her to a place of safety, her first boss also sexually harassed her on a regular basis.

“Because those were the only adult men I had around me,” she explains to Reiji (still disguised as Nichol at this point), “I became a huge coward… and started seeing every man as an enemy.” 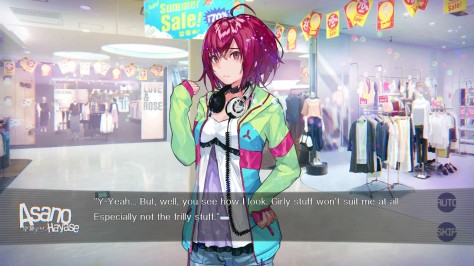 At this point, her nature starts to make a certain amount of sense. Her anger comes from years of feeling like the world is against her and her sister. Her heavy drinking is a way to try and dull the pain. Her refusal to see herself as truly feminine stems from her fear of being abused again if she acknowledges that side of herself. And her shotacon nature is less about genuine sexual attraction or a desire for romance with a young boy, and is more a coping mechanism for past trauma; by now it suddenly feels a whole lot less likely that she would actually do anything unforgivable, and is instead more in love with the escapism that the fantasy provides than anything else.

“The memories I have with boys are stuck in elementary school,” she continues. “I’m a saddening woman, aren’t I?”

“No you’re not!” Reiji retorts. “You’re not saddening at all! Well, you sometimes do and say saddening things, but that doesn’t matter. You are a pure, gentle, strong, wonderful woman who loves her sister a lot. I like your strength. I like your gentleness. I like how saddening you are. Strong, gentle, saddening — all of this is part of what makes you a great person. That’s why you’re best just the way you are!”

It’s at this point that both Asano and Reiji really come to a full understanding for the first time; it’s a lovely moment of acceptance, and a turning point for both characters. Having spoken these words out loud, Asano can recognise her feelings for what they actually are, while Reiji has had the unique opportunity to get to know someone important to him in a way that would be impossible under normal circumstances — although not without some feelings of guilt about how it was achieved.

Like the rest of the cast in Our World is Ended, Asano is an interesting, complex and deeply flawed character — and getting to know her is a real pleasure, even if it makes for some uncomfortable discussion at times.

It’s hard not to come away feeling empathy and sympathy for the poor girl, though; the world’s well and truly put her through the wringer, but maybe, just maybe, she’s finally found somewhere to truly belong.

More about Our World is Ended