It’s a double feature today, as the two games in question were bundled together as Sega Ages 2500 Vol. 6 on PlayStation 2 in Japan, and indeed remain as a single “unit” in the Sega Classics Collection we got here in the West.

Bonanza Bros is a staple inclusion in most people’s Mega Drive libraries — indeed, it’s tended to find its way into most of the Mega Drive compilations for subsequent consoles over the years, too — but Tant-R may well be new to you, since prior to the Sega Classics Collection release it was Japan-exclusive.

The Sega Ages versions of both games don’t radically reinvent anything to the same degree as Tamsoft’s take on Monaco GP, but they remain solid games in their own right. So let’s take a closer look.

First up, Bonanza Bros. If you’re unfamiliar with this game, it’s a simple but highly enjoyable concept: you (and possibly a friend) take on the role of burglars attempting to infiltrate a series of increasingly secure locations and pilfer all the goodies within. The game’s original Western localisation rebranded the burglars Mobo and Robo to “security testers” Mike and Spike, presumably in an attempt to not corrupt the fragile little minds of young American and European children, but the Sega Ages version returns to the original concept.

Bonanza Bros is an interesting melange of game styles and mechanics. In many respects, it’s an early example of a stealth-action game, with players most likely to meet success if they take the time to watch the patrol patterns of guards rather than charge in guns blazing. There’s also an element of Activision’s venerable Keystone Kapers for the Atari 2600 and its kontemporary home komputers as the action unfolds from a relatively close-up perspective while allowing you to plan a larger-scale strategy using an overview map.

Mobo and Robo have the ability to move, jump, shoot, open doors and move in quasi-3D. The game unfolds from a slightly angled side-on perspective similar to a beat ’em up, and thus allows movement “in” and “out” of the screen as well as left, right, up and down. The game takes full advantage of this design choice by affording the player plenty of opportunities to hide around corners, slam open doors to crush guards behind them (or indeed suffer a similar fate themselves) or simply sidestep incoming attacks.

While perhaps not implemented quite as elegantly as a game unfolding in true 3D, the use of perspective certainly helped Bonanza Bros stand out on its original release, and it allows for some interesting strategies while playing.

The aim in each level is twofold: locate all the treasures, then leave via the exit, which is usually on a rooftop. All of the objectives are clearly marked on the map at the beginning of the level, so it’s simply a case of planning an efficient infiltration, avoiding or dealing with guards, then escaping before time expires.

The guards are a varied bunch, with some proving significantly more dangerous than others. The most basic guards can be knocked out with a single shot from the brothers’ pellet guns, but as you progress you’ll start having to deal with guards who have riot shields (who can only be hit from the back) and large, fat guards who require multiple shots to take down while they’re throwing bombs at you. You can avoid combat altogether if you stay out of their line of sight and make sure you don’t touch objects that make a noise — though naturally, as you progress through the game, the occurrences of these latter hazards in particular becomes significantly more frequent. 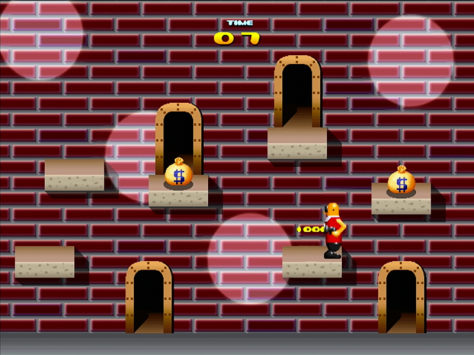 Bonanza Bros is an enjoyable challenge in single-player, but it shines in its split-screen simultaneous two-player mode. Here, both Mobo and Robo can move around the stage independently of one another, collecting the treasure between them and cooperating to take down guards — or perhaps competing to see who can score the most points. It’s one of those games where you have the scope to do either; how much you feel the need to screw over your partner will almost certainly correspond with how much importance you place on numerical scores!

It’s a good time, to cut a long story short. Now, what about that Tant-R?

Tant-R, or Puzzle & Action: Tant-R to give it its full title, was originally released to arcades three years after the original Bonanza Bros before seeing a Japan-only home release for Mega Drive and Game Gear. The game is technically a spin-off of Bonanza Bros, but only insofar as it makes use of the same character designs playing different “roles”. The fat guard from Bonanza Bros is now the main antagonist, for example, and Mobo and Robo have abandoned their iconic shades in favour of Sherlock Holmes and Dr Watson costumes to take on the role of detectives.

Tant-R sees its protagonists attempting to chase down the antagonist but continually being slowed down by his henchmen. In order to defeat each henchman, the pair must play a series of minigames. Successfully completing four minigames defeats the henchman and allows progression; defeating all the henchmen in a stage sees the antagonist escaping in a balloon and an aerial chase bonus stage unfolding before the whole process repeats again.

Each “stage” sees one player selecting a minigame from a selection of four available. This is achieved by stopping a spinning searchlight on a game icon rather than picking directly, though the searchlight’s speed is such that it’s reasonably straightforward to get the one you want if you have a preference. Once a minigame is chosen, the participating players (one or two simultaneously in the standard “story” mode, but up to four in total in the new “Free” modes added for the Sega Ages release) have to rack up three “successes” between them; failed attempts, incorrect answers or the expiry of a timer for a minigame cost lives, meanwhile.

The minigames encompass, as you might expect, both “puzzle” and “action” variants. The action games range from simple shoot ’em ups to button-mashing and precise timing challenges, while the puzzle side of things tends to err on the side of abstract tasks much like those you’d find in pen-and-paper puzzle books. One sees you performing “maths” with shapes, for example, determining which shapes need to be added or subtracted to one another to produce a target result; others challenge you to remember patterns, spot differences or quickly decipher logic problems. In the most extreme cases, the games effectively challenge you simply to figure out what on Earth you’re actually supposed to do given the tools at your disposal!

When playing with more than one person, players act simultaneously, and in the standard arcade mode, the successes the team racks up between them are specifically marked according to who was responsible for them — usually who was quickest to give a correct answer. In this way, much as Bonanza Bros rewards both cooperation and competition, so too does Tant-R.

It’s a peculiar game, for sure — and a lot more obviously “Japanese” than Bonanza Bros ever was, featuring some crunchy early ’90s samples of Japanese speech and traditional Japanese artwork in some minigames. Those who don’t have much time for compilations of minigames may not see the appeal — particularly if you’re playing solo. Grab a friend or three, however, and much like Bonanza Bros shines in two-player, Tant-R really shows its true colours. It’s the kind of game that will provoke good natured arguments that quickly degenerate into torrents of foul language by the end of the night — and that, as everyone knows, is the sign of a great party game.

In terms of “upgrades” for the Sega Ages release, neither Bonanza Bros nor Tant-R have had a great deal done to them, with their main enhancement being their higher resolution graphics when compared to their early ’90s counterparts. As previously noted, Tant-R also has the two- and four-player “free” modes added to the standard arcade version, too, but other than that it’s mostly untouched from its original incarnations.

And that’s fine. Both Bonanza Bros and Tant-R were already solid games that had aged pretty gracefully. A bit of spit and polish was all they needed to justify a rerelease — and for Westerners to get their first taste of the joy of “Puzzle & Action”. Definitely a highlight of the Sega Classics Collection, for sure, and well worth taking the time to explore — particularly if you have a friend you can play with. Or against!