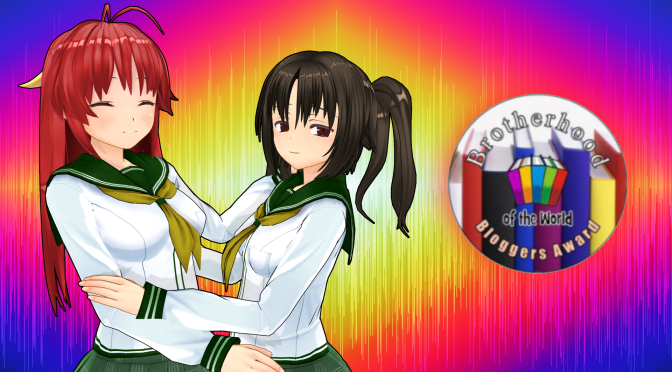 The charming and attractive Arthifis was good enough to nominate me for the “Brotherhood of the World Bloggers Award”, and these things are always a good bit of fun, so I thought I’d indulge.

For the uninitiated, these “Award” posts are primarily an excuse for those of us with itchy typing fingers to cross-promote each other, get to know one other a bit better and also to let you, dear reader, find out a bit more about us. So without further ado, let’s begin this round.

Some of these awards have complicated rules for everyone to follow. This is not one of them. It’s as simple as it gets!

Easy-peasy, right? Okay. So first of all, thank you to Arthifis for the nomination; here come my answers to your questions!

If you could produce your own anime, which genre would it be? Who would be the main lead?

I’ve had a story knocking around in my head for… probably about twenty years now. Initially I intended it to be a video game (made with Klik and Play, because I’m hardcore… also I am bad at programming) and have also considered making it as a visual novel, a straight-up novel and, err, a different type of video game. So, hell, why not an anime too?

It’s a blend of slice-of-life, horror and fantasy, I guess, with what we now know as elements of isekai along the way. It stars a teenage female protagonist who discovers that she is the “Dreamwalker”, an individual who is able to remain conscious and lucid as she passes from our real world into the dream world… and subsequently even harness the fantastic power of dreams to pull off superhuman feats. A Dreamwalker appears whenever the forces of the Nightmares threaten the link between the two worlds, and this time around it’s because of… well, that would be a spoiler, wouldn’t it?

The narrative blends the protagonist’s attempts to live a relatively normal life at school with her initially reluctant efforts to understand these new powers she has. It would have an amazing soundtrack and wouldn’t pull any punches in terms of allegorical representations of relatable trauma and mental health issues, but would also have spectacular fight scenes.

One day I’ll get this story finished and presented in some form or another. One day…

If you had to describe your blog in 3 words what would it be?

What is your favorite anime/game/book/anything genre and why?

Oh, God, I hate any time the question of “favourites” comes up because I honestly feel like I don’t… ah, hold on, favourite genre, you say? That I can manage.

Well, I’ll preface this saying I’m going to give two answers because when you’re talking about games, there are absolutely two ways you can interpret the term “genre”. Firstly is mechanical genre, or what type of game it is. And secondly is narrative genre, or what the story is about.

In terms of mechanical genre, it’s RPG, without question. I didn’t really understand what RPGs were when I was growing up with video games, but playing and adoring Final Fantasy VII on the original PlayStation helped me figure out what I’d been missing. Today, RPGs are my favourite type of  game, bar none, and, of course, “RPG” can be further subdivided into various other categories, too — you’ve got roguelikes, dungeon crawlers, linear narrative-centric RPGs, open-world freeform RPGs, MMORPGs.

I have a lot of time for most of these, though I must say I, as you might expect, have a strong preference for colourful anime-inspired Japanese (or Japanese-style) RPGs rather than the more gritty, realistic look of most Western takes on the genre. I really don’t enjoy the Elder Scrolls series, for example, but that doesn’t mean I don’t like open-world RPGs, as my many hours spent playing the Xenoblade Chronicles series will attest.

If I had to pin down my favourite mechanical genre, I think it would be RPGs that take structural elements from MMOs. I don’t think there’s really a clever, easy name for that “genre”, but it includes titles such as the aforementioned Xenoblade Chronicles series, Final Fantasy XII, Final Fantasy XV and some of the later Tales games, particularly Tales of Xillia and its sequel. They’re RPGs that have a decent (typically linear) story, but afford you a decent amount of freedom over the course of their complete narrative to explore, complete quests, battle tough foes, discover interesting things about the world and generally do all sorts of other stuff besides the main scenario.

In terms of narrative genre… this is a tough one, because it honestly depends somewhat on mood. If I had to pin it down, though, thinking back to the specific games I’ve enjoyed the most over the years, I think it’s probably that distinctive blend of fantasy and sci-fi a lot of anime-style RPGs tend to go for (leaning somewhat in favour of the “fantasy” angle… swords not guns!). I will, however, qualify that by saying I also feel it’s very important to incorporate some slice-of-life elements along the way too. I want the characters in my party to feel believable and relatable as well as being powerful mages, invincible tanks or a skilled swordsmen. Significant bonus points if it is an all-girl cast and there are strong yuri elements.

Good enough answers for you? I hope so. All right, I need to nominate some people, don’t I? I don’t know who has had previous nominations for this, so I offer apologies to those included in this list who have already had one. Obviously participation in this is optional, so don’t feel any obligation to join in if you don’t want to; just know your work is appreciated!

And if you’re a reader rather than a blogger, take this as a list of blogs you should absolutely take a look at the next time you need (or want) something interesting to read!

I nominate, in no particular order…

And here are some questions for you to tackle if you feel like it.

Thanks for your time, and keep enjoying the things you love!