One of the most interesting, unusual and genuinely good freeware projects out there in the wild, Barkley, Shut Up and Jam: Gaiden, as we shall refer to it hereafter, is a JRPG-inspired game that every fan of the genre owes it to themselves to spend some time with… and that even people who don’t find themselves typically into JRPGs can also have a great deal of fun with, too.

Positioned as a sequel to both the 1993 Mega Drive sports game Barkley, Shut Up and Jam and the 1996 live action/Looney Tunes hybrid movie Space Jam, Barkley, Shut Up and Jam Gaiden is a highly creative sci-fi parody that pokes fun at a whole ton of things over its relatively short runtime, but manages to do so without ever feeling mean-spirited or like it’s “trying too hard”. And that, if nothing else, is reason for celebration. 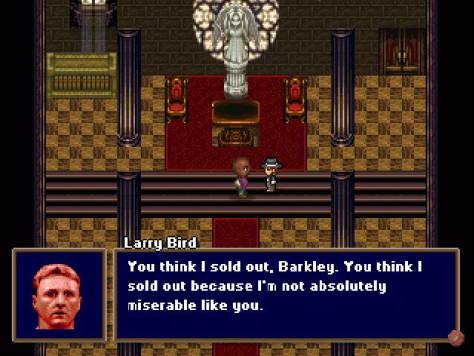 On the off-chance you’re unfamiliar with this peculiar game, the setup is thus. In the year 2041, Charles Barkley performed a forbidden move known as a “Chaos Dunk” during a basketball match, inadvertently killing most of the people present in the process. Basketball was subsequently outlawed, and the world entered a dystopian period where anyone even vaguely suspected of harbouring thoughts of basketball would be mercilessly hunted down by the B-Ball Removal Department.

In 2053, millions of people are killed by another Chaos Dunk, which Barkley is blamed for. Pursued by a Michael Jordan-fronted B-Ball Removal Department, Barkley begins a quest to escape, clear his name and get to the bottom of what is really going on… and to discover whether or not there is any truth to his son “Hoopz” Barkley being “The One”.

It all sounds thoroughly ridiculous on paper, and it is, of course — we’re talking about a game that features Barkley teaming up with a Cyberdwarf and the great-grandson of LeBron James to find an all-powerful Spalding basketball, and along the way fighting off everything from Ghost Dad to the Monstars from Space Jam — but the admirable thing about Barkley, Shut Up and Jam: Gaiden is how beautifully straight it plays the whole thing.

It would have been easy for the game to get caught up in its own wackiness, and it’s to its credit that it doesn’t. Indeed, a noteworthy (and not especially praiseworthy) trend in modern games, particularly from the Western indie sphere, is to be extremely — sometimes obnoxiously — self-aware about their humour. Whether this is through something as simple as incorporating as many superlatives as possible into their title — an extremely well-worn joke intended to lampoon Capcom’s various releases of Street Fighter over the years in particular — or through fourth wall-breaking commentary from the characters involved in the game, all too often this sort of self-consciously wacky humour comes across as very forced and often rather cringeworthy. (This isn’t to say you can’t do it right, of course — the Neptunia series is a great example of doing it well because it doesn’t overuse it — but an awful lot of modern games really do overplay it.)

Barkley, Shut Up and Jam: Gaiden sidesteps all of this, partly by now being ten years old and thus a product of a time before some of the trends I’ve just described, and partly simply by taking itself very, very seriously. At no point do you feel like the game is pointing at itself and going “do you see what we did there?”, even with its insanely long full title — it is very obviously a parody of JRPG conventions, including ridiculous storylines, bizarre casts of characters and even abstract battle mechanics, but it never feels the need to draw the player’s attention to these aspects. It just is what it is, and you can interpret it as you see fit. 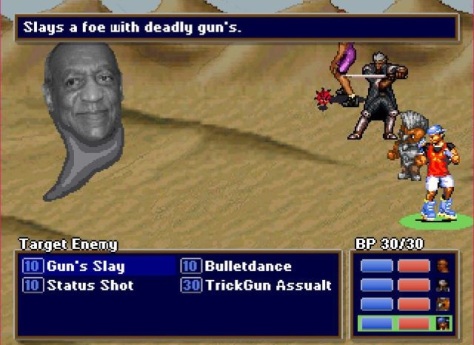 Part of the whole “playing it straight” thing comes from the fact that the whole experience has clearly had a lot of care, attention and effort poured into it, and this is obvious right from the opening title screen. Accompanied by an awesome remix of the Quad City DJs’ main theme for Space Jam, featuring some glorious use of chiptune and FM synthesis voices for that authentic “console-style” sound, it sets quite the strong first impression for the experience.

And the rest of the game’s audio-visual presentation is very strong, too, combining both original content and “borrowed” visuals, music and sounds from a wide variety of different sources, ranging from the aforementioned digitised Ghost Dad as a pixelated battle sprite to the incredible cock-rock combat theme “Eternity” from Mistwalker’s Blue Dragon, featuring Deep Purple vocalist Ian Gillan.

Somehow, despite its disparate array of influences — and sources that it outright lifted content from — Barkley, Shut Up and Jam: Gaiden managed to feel like a remarkably coherent experience from start to finish. It helps that the whole thing is surprisingly well-written despite its obvious ridiculousness; the overall plot has good pacing and features moments of drama, comedy, triumph and tragedy, and before long you’ll almost certainly find yourself forgetting the sillier aspects and simply being swept along by the experience as a whole.

On top of that, it’s mechanically sound, too, featuring some interesting battle mechanics inspired by games such as Super Mario RPG, and even shows an awareness of common frustrations with the JRPG genre as a whole — grinding is kept to a minimum, and the whole thing is only a few hours long, so even those who complain about 100+ hour epics can see the whole story without too much difficulty.

I honestly can’t praise Barkley, Shut Up and Jam: Gaiden highly enough, particularly considering it’s a free game — although with the amount of copyright infringement going on throughout the game as a whole, a licensed commercial version would be an absolute nightmare for everyone involved.

It is, like the very different but no less remarkable Katawa Shoujo, one of those games that proves that the freeware scene is far more than just a few hobbyists cranking out Unity asset flips and RPG Maker projects with default assets and very little in the way of imagination. It’s a sector that allows pretty much unbridled creativity… and when there’s a team like “Tales of Game’s” [sic] at the helm willing to clearly put their all into a project like this, the results can rival and even exceed commercial offerings in terms of quality and the amount of entertainment you can get from it.

Sadly, the Kickstarter-funded sequel The Magical Realms of Tir na Nog: Escape from Necron 7 – The Revenge of Cuchulainn: The Official Game of the Movie – Chapter 2 of the Hoopz Barkley SaGa is yet to be released — though work appears to be continuing apace on it — but in the meantime, if you’ve somehow missed out on the original peculiar masterpiece, download it right here and set some time aside to slam jam and enjoy it in its entirety. You won’t regret it.

Happy birthday, Barkley, Shut Up and Jam: Gaiden. The world would be a darker, more miserable place without you in it.

More about Barkley, Shut Up and Jam: Gaiden