Now our exploration of the Rance series is well underway, it’s only fitting we celebrate some of its excellent female characters.

And where better to start than the protagonist’s perpetual companion (and slave) Sill Plain?

Sill has been a fixture in the series from its inception through to its current status, acting as Rance’s long-suffering sidekick and primary romantic interest despite her status as a slave. She’s one of the series’ most beloved characters, and the perfect counter to Rance’s shameless, brutish nature.

Sill hails from the mage-dominated land of Zeth, setting of Rance VI, and indeed is a mage herself. She is originally from a wealthy family, but unknown circumstances in her past caused her to end up in the slave market and ultimately sold to Rance in the year LP0001, prior to the events of the first Rance game. (She cost 15,000 GOLD, if you were wondering.)

As a slave, Sill was originally sold under the influence of Absolute Obedience Magic to prevent her from going against her master, but at some point over the course of the Rance series’ complete narrative, this wore off without her telling anyone, since it provided a convenient excuse for her to stay by Rance’s side at all times.

Yes, Sill harbours feelings of love towards her sadistic, disrespectful master — a man who frequently and regularly treats her like absolute crap — though it’s not immediately clear whether this is a case of Stockholm Syndrome or something more profound.

Rance, as it happens, also harbours genuine feelings of affection for Sill to such a degree that he will go out of his way to help her whenever she is in trouble — generally speaking, if you analyse the series as a whole, Rance typically performs his most significant feats when his separation from Sill acts as the initial catalyst. His prideful nature precludes him from admitting that he is doing this for any reason other than “to get his slave back”, however, because he’s a jerk.

This is also likely the source of his abusive behaviour; whether it’s denial of his feelings to himself or an attempt to “save face” with the people around him, Rance’s poor treatment of Sill tends to have more than a hint of “protesting too much” about it, and numerous characters over the course of the series have been known to comment about how obvious it is that the brutish warrior genuinely loves this delicate pink-haired girl. Rance often demonstrates himself to have rather immature attitudes about a number of things, and what’s more immature and juvenile than a boy trying to attract a girl’s attention by being mean to her? 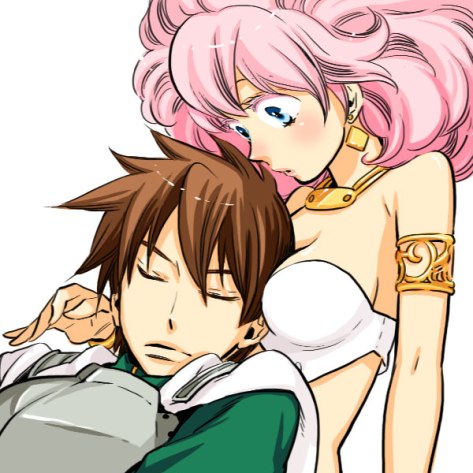 By contrast, Sill herself tends to deal with Rance with an almost infinite amount of patience, much like a parent, guardian or teacher working with a troubled youngster. Indeed, much of her dialogue with him carries the tone of a slightly exasperated mother putting up with the behaviour of a particularly rambunctious toddler — albeit a toddler rather more prone to (and capable of) violent rampages and sexual assault than that which one might normally see at the local playgroup. Sill clearly sees things in Rance that might not be immediately obvious to the casual observer, and despite frequently suffering abuse at his hands, appears to have absolute trust and faith in him to ultimately do the “right” thing, regardless of what he might get up to in the intervening time.

In narrative terms, Sill acts as a foil for Rance, attempting to pull him back from his worst excesses when she can but not always being entirely successful in doing so. She finds it particularly difficult to deal with him having sex with (or straight-up raping) other women for a variety of obvious reasons, but Rance’s monstrous libido is just one aspect of his personality she has sort of learned to deal with over the years. And if we truly analyse his behaviour, Rance is at his most brutish when Sill isn’t around to restrain him; when she is by his side, he’ll often hold himself back somewhat, though he’d be the last to admit this. Indeed, while he is not quite considerate enough to simply forego the pleasure of having sex with other women, he will generally at least ensure Sill is elsewhere or otherwise occupied before he does so; doubtless small comfort for the poor girl, but likely the best she can hope for.

Sill is used particularly effectively as a “sidekick” in Rance 5D, since the majority of the game consists of her and Rance getting involved in a variety of peculiar situations, with her typically acting as the voice of reason while Rance considers doing something impulsive and quite possibly stupid. Ultimately the talents — and personalities — of both characters are required to succeed. It’s clear that despite Rance being insistent on their relationship being that of master and slave, he respects her abilities both as a mage and simply as an intelligent young woman, and will often defer to her when he knows she is more capable of achieving something — or simply figuring something out — than he is.

Perhaps the most striking thing about Sill over the course of the series as a whole is how she acts as a rock of stability for Rance himself; it’s clear that without her presence, he would become a monster, but as time goes on, he actually mellows somewhat and starts to do “good” things more readily and without the need for cajoling or coercion. Where we join the series for the first time in the West with Rance 5D and VI, this is just starting to become apparent; it is explored further over the subsequent installments Sengoku Rance, Rance Quest Magnum and Rance IX, and it will be very interesting indeed to see where his overall arc ends up by the conclusion of final installment Rance X.

To put all this another way, although events in Rance VI make it apparent that Rance is apparently connected by destiny to a number of different women, much to his delight, Sill is very much this brutish, chaotic warrior’s one true waifu, and always will be.