Everyone has a favourite in the Neptunia cast, but even if she’s not top of your list, it’s hard to dislike Vert.

The blonde-haired, big-breasted goddess of Leanbox personifies Microsoft’s Xbox platform as well as embodying the anime trope of “beautiful foreigner” thanks to her physical characteristics.

And as with the rest of the Neptunia cast, there’s a lot more to her than first appears, too, making her a delight to get to know and spend some time with. 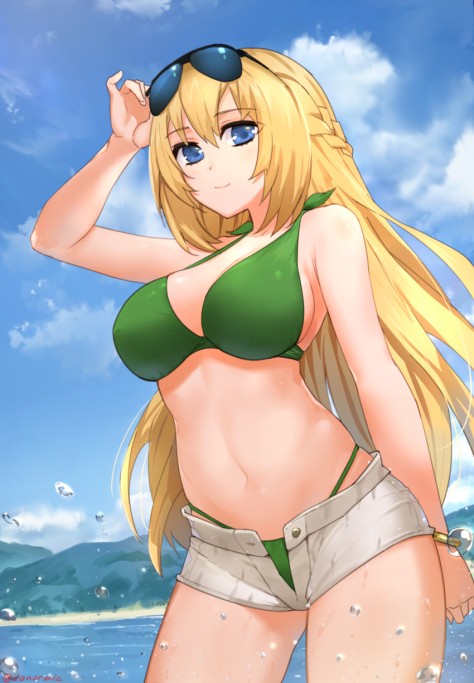 Regardless of where you first encounter Vert, your first impression of her will doubtless be that she is a rather more mature woman than the rest of the cast. She carries herself with effortless grace, dresses in a refined manner (albeit also in a way that tends to emphasise her impressive bust, much to the chagrin of the flatter members of the cast such as Blanc) and even speaks with gentle formality; her Japanese voice track sees her using stereotypically “princess”-type phrases and tics such as “watakushi” instead of “watashi” for “I” and ending her sentences with “desu wa”.

It would be understandable, then, if you were to see her as the ideal older sister, and indeed the various games of the series often play on this by having her acting in a somewhat overbearing manner towards Nepgear and or IF in particular, both of whom Vert is strongly implied to have feelings for.

Both Nepgear and IF are young characters who make a specific effort to appear “older” than they are; Nepgear by being much more responsible than her chaotic sister Neptune, and IF both by attempting to be the “voice of reason” in various ridiculous situations, as well as wearing a coat that is clearly intended for a much larger and/or older person than her. This is, apparently, a character trait that Vert finds utterly irresistible.

Part of the reason for this might be the fact that despite her carefully crafted onee-san facade, Vert is rather immature at heart, often shirking her duties to the land she rules in favour of all-night gaming sessions and marathon indulgences in yaoi anime and manga.

Yes, Vert is very much a fujoshi at heart, in her own way acting as the Neptunia team’s acknowledgement that the series has a significant female fanbase — fans who, as well as appreciating the universal appeal of Neptunia’s chaotic comedy, parody and satire, may well find themselves enjoying the world of boys who love boys.

Like the other Neptunia characters’ quirks, Vert’s interest in this sort of thing is not treated in a judgemental or negative manner — it’s simply part of who she is. Sometimes the other characters may poke fun at her for it, of course, just like they poke fun at Noire’s enjoyment of cosplay, but this is always good-natured at its core, and Vert repeatedly shows herself in these exchanges to want her hobbies to be inclusive for everyone.

In this way, as well as reflecting the female fanbase of Neptunia and games like it as well as the other things they might be into, Vert as a character also acknowledges the overall community of players who appreciate this sort of experience as a whole. As many of you reading this will unfortunately know, games such as Neptunia that are regarded as “otaku games” are often treated with unfair and ill-informed disdain or even censure by the wider gaming community and press, when more often than not the people who love them actually want to share them with as many people as possible — for a variety of reasons.

Vert’s response to the teasing from her compatriots (which at least differs from reality by being friendly in nature rather than deliberately malicious or judgemental) demonstrates the best possible way to handle this situation: remain calmly aloof, stay true to your passions and beliefs and welcome in anyone who finds themselves curious and wanting to know more. She never gets mad, she never gets defensive; she owns who she is and stands firm to that self-perception.

Vert is an incredibly appealing, likeable character, but her excellent design continues beyond just her basic personality, as there are a number of ways she reflects her inspiration beyond just aspects of her physical appearance. For example, in the original Hyperdimension Neptunia game, she was often depicted as getting too hot and bothered to be able to do anything useful, a reference to the early model Xbox 360s’ tendency to get too hot and give the notorious “red ring of death” error. In later installments, this was toned down, but her extremely revealing “goddess form” costume, intended to make it easier for her to vent heat, remained as a continued acknowledgement to this aspect of her. 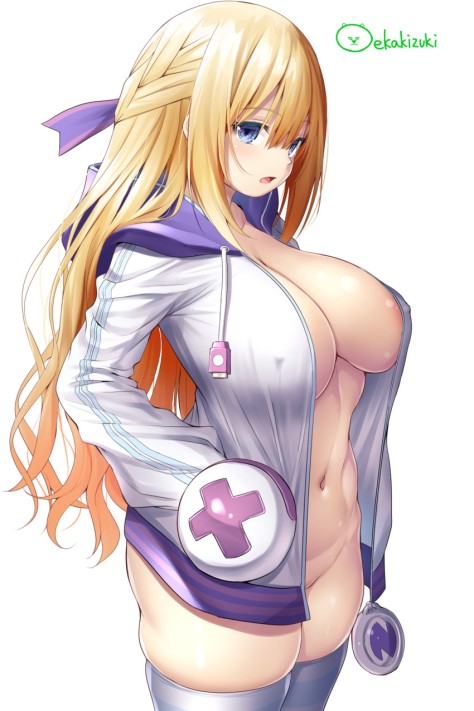 Vert’s tastes in gaming also tend to reflect the types of experiences that the Xbox platforms are particularly known for, most notably racing and shooting games. There’s even an argument to be made that her interest in homoerotic media stems from the Xbox platform’s longstanding perception as focusing largely on stereotypical “masculine” exclusives such as Gears of War and Forza Motorsport; the idea of “no girls allowed” taken to its natural, exaggerated extreme, if you will.

Even her overall physical appearance reflects the Xbox. By following the anime convention of depicting “foreigners” (particularly Americans) as blonde-haired, blue-eyed and large-breasted, Vert wordlessly demonstrates that she is not of quite the same origin as the rest of the cast — just as the Xbox is American, unlike the Japanese Sega, Nintendo and Sony platforms her comrades represent. She’s obviously different, but she manages to fit in perfectly, reflecting the fact that although the Xbox caters to a somewhat different demographic as the other platforms, it is still, at its core, a machine for playing games on.

Vert is one of the best examples of how Neptunia appeals to a broad audience and has something for everyone. In some ways, she’s designed to be one of the more “normal”-seeming members of the cast, a good counterpoint to the relentless energy and chaos of characters such as Neptune, but she has plenty of depth, many interesting traits and lots of her own comedic moments throughout the various games’ scripts.

She’s a much-loved character in the franchise with good reason, and if nothing else, well, don’t you just want to snuggle up in that incredible bust? I bet it’s warm and soft…